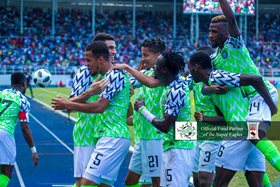 Super Eagles coach Gernot Rohr will be in the stands when Kano Pillars tackle Enugu Rangers in the final of the Aiteo Cup on Wednesday, October 24.
The former Bayern Munich defender has said that he will run the rule over Kano Pillars striker Junior Lokosa with a view to a call-up to the Nigerian National Team.
Lokosa was the surprise inclusion in the Super Eagles provisional squad list for the 2018 World Cup but has not been invited to the national team in their last three games.
''When we made our final meeting with the staff to make our final 23 players for the World Cup, we were unanimous and there was no doubt that we should pick another player. Junior Lokasa is a good one,'' Rohr told SuperSport.
''I think he tried also to go to Norway but they didn’t take him.

''We will see him again in Wednesday’s game but the doors never closed for them (NPFL players) and we are always open to take the best.''
Rohr concluded by saying that it's difficult calling up domestic-based players to the Super Eagles because the Nigeria Professional Football League has been on break.
Igho Kingsley