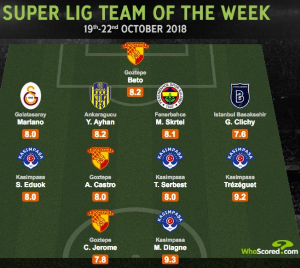 Emem Eduok continued his brilliant form on Saturday when he netted in Kasimpasa's 5-0 rout of Akhisarspor in the Turkish Super Lig.
It was the Nigeria international's fourth goal in his last three matches for the modest Istanbul based club, and he has been recognized after making Whoscored.com's Team of the Week for the ninth round of matches in the division.
Eduok was one of three Kasimpasa stars picked in midfield in a 4-4-2 formation, the others being Trézéguet and Serbest.
The former Esperance winger attempted four shots against Akhisarspor with one on target, completed one dribble and was fouled once.
Ankaragücü's Olanrewaju Kehinde and Trabzonspor's Eddy Onazi were the other Nigerian players in action on game week nine in Turkey.

Injured Super Eagles duo Henry Onyekuru (Galatasaray) and Abdullahi Shehu (Bursaspor) were not involved for their respective teams and Yeni Malatyaspor's Sincere Seth was an unused substitute.
The 24-year-old Eduok has tallied 5 goals and one assist in nine appearances in the Super Lig this season.
Ifeanyi Emmanuel