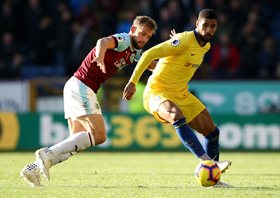 Chelsea continued their start to the English Premier League season as they defeated Burnley 4-0 on Sunday afternoon.


Prior to kickoff, the Blues had only won one of their last four top-flight matches although were unbeaten under new manager Maurizio Sarri.
Burnley found themselves on the wrong end of a 5-0 hiding by Manchester City at the Etihad last weekend but had previously collected seven points from a possible nine.
The Clarets had not beaten Chelsea at home since 1973 but did knock off the Blues at Stamford Bridge last season in a fixture when the hosts ended with nine men.

Sam Vokes, who recently signed a new contract at Turf Moor, got the nod up front as the lone striker, which gave Sean Dyche plenty of attacking options on the bench in the shape of Ashley Barnes, Chris Wood and Matej Vydra. The Welshman scored twice in Burnley's 3-2 win at Chelsea last season.

Interestingly, there was no Victor Moses or Callum Hudson-Odoi on the bench which meant that Sarri did not have a winger in reserve.

The hosts made a bright start with Berg Gudmunsson making a breakaway down the right. He was held up by Jorginho and the cross was cut out by Antonio Rudiger, with Vokes waiting behind for a header.

Goalkeeper Joe Hart made an excellent reaction save, as he pushed Alvaro Morata's header over the crossbar. Willian had teed the ball up for Ross Barkley, whose left-footed shot was on its way horribly wide before Morata intelligently diverted it towards goal. Hart had to change direction quickly to make his first save of the afternoon.

Chelsea almost went in front after 21 minutes. Morata spinned away from James Tarkowski skillfully and released Willian with a beautiful pass inside Lowton, who was caught too narrow. The Brazilian travelled inside and bend a shot around Hart but against the base of the far post.

Star man Eden Hazard who missed out through injury was joined joined by his replacement today, with Pedro limping off holding his groin. The Spanish international was replaced by Ruben Loftus-Cheek.

In the 41st minute, Matthew Lowton played Morata onside and the Spaniard was able to bring Jorginho's lofted pass under control. He let the ball dropped and fired a powerful volley at goal from 12 yards out, only for Hart to stretch himself to make an excellent block from point-blank range.

First half ended 1-0 in favour of the Blues.

There was another goal in the second-half at Turf Moor, with Barkley giving the Blues some daylight. Ngolo Kante moved the ball infield to the midfielder, who had Willian to his left but decided to go alone and drilled a left-footed shot into the bottom corner from 25 yards out.

With his goal, Barkley became the first Englishman to score in three successive Premier League games for Chelsea since Frank Lampard in 2013.

Three minutes after the hour, Chelsea were out of sight. Willian had fired a couple of warning shots Burnley's way in the first half, and the Clarets ignored his threat drifting in from the right. The Brazilian's shot took a little nick on its way through, giving Hart absolutely no chance as it nestled into the bottom corner.

Substitute Olivier Giroud had the chance to score. Willian was released in behind, and the Brazilain held up the ball before laying it off for Giroud, whose left-footed shot had a fraction too much bend on it and finished the wrong side of the post.

At injury time, substitute Loftus-Cheek capped off a fine week for both him and Chelsea with a stoppage-time fourth, burying a shot beyond Hart after Marcus Alonso had worked the ball to him from a corner.