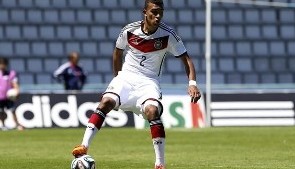 Hoffenheim central defender Kevin Akpoguma has admitted that he would consider playing for the Super Eagles if he is not handed a call-up by Germany's senior coach Joachim Löw in the coming years.
For the past four years, the Nigeria Football Federation have been trying to convince Akpoguma to switch allegiance from his country of birth to Nigeria, where his father hails from, but he turned down the opportunity.
The 23-year-old has 64 caps in total for Germany's U16, U17, U18, U19, U20 and U21 national teams but has not represented the European powerhouse since March 28, 2017.
''The thing is that I was born in Germany and I have played for all the youth teams of Germany and I am still a young player,'' Akpoguma told The Guardian's Christian Okpara.
''So, I want to leave it open because Germany can still call me. But if I have no other option to play for Germany, then I can consider playing for Nigeria because my dad is from Nigeria.''
Akpoguma has also caught the attention of manager Gernot Rohr, and the former Bayern Munich defender was unable to sweet talk him into joining the Super Eagles.
''Gernot Rohr visited us here in Hoffenheim and talked a lot about the young team he is building. I saw it at the World Cup; there are very good players like Iwobi, Ndidi and Leon Balogun.
''He explained all the things because I had a good conversation with him. But as I said, I want to leave every door open. When the time comes, I will let the world know my decision,'' he concluded.
Sidney Sam (VfL Bochum), Dennis Aogo (VfB Stuttgart) and retired Borussia Dortmund star Patrick Owomoyela opted to represent Germany senior national team at international level ahead of Nigeria and it remains to be seen which country Akpoguma will eventually play for.
Ifeanyi Emmanuel
Photo Credit : uefa.com