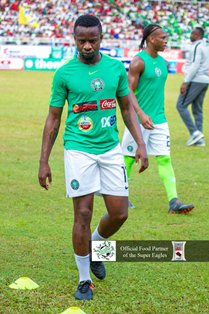 Trabzonspor midfielder Eddy Onazi was on another level in his team's 1-1 draw against Antalyaspor in the Turkish Super Lig on Saturday, earning rave reviews for his performance at the Antalya Stadyumu.
Of the 28 players in action, the Nigeria international touched the ball the most, 111 times in total, placing first ahead of Argentinian teammate José Sosa who had 100 touches.
Out of the 92 passes Onazi attempted, he completed 72 and ended the game with a passing accuracy of 82.6 percent.
But the most eye-catching stats is that he was the joint top dribbler, along with Antalyaspor's Dogukan Sinik with four take-ons.
The 25-year-old had a game-high five tackles, won two fouls and made one interception.
In an obvious dig aimed at Gernot Rohr, Onazi criticized the German for not handing him playing time at this summer's World Cup.
The relationship between master and pupil is set to further deteriorate as the former Lazio ace has been omitted from the latest Nigeria roster announced on Monday for no good reason.
''I'll show my quality and talents to those who didn't give me the chance to play in the World Cup,'' Onazi told the Turkish press.
Ifeanyi Emmanuel