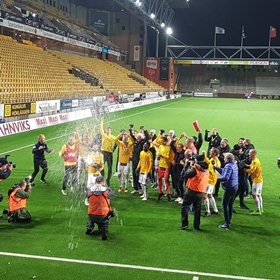 Falkenberg will be playing in the Swedish topflight, the Allsvenskan, next season following their 2-2 draw on the road against Norrby.
Prior to yesterday's game at Boras Arena (Boras), Chisom Egbuchulam and his teammates needed only one point to seal promotion to the Allsvenskan and they earned it with their Nigerian striker playing a key role.
Abbas Mohamad gave the home team the lead after 12 minutes but two quick goals early in the second half from Erik Pärsson and Egbuchulam overturned the one-goal deficit before Khayat leveled the tie in the 65th minute.
With only one game left for Falkenberg in the Superettan, they have seven points more than third placed AFC Eskilstuna, who have played a game less.
Egbuchulam is the joint-leading scorer in the Swedish second-tier with 14 goals to his name, along with Helsingborg's Bjarnason.
The 26-year-old striker netted a brace against Skoftebyn in the Svenska Cupen, taking his tally to 16 goals in all competitions in the 2018 season.
Ifeanyi Emmanuel
Photo Credit : falkenbergsff.se