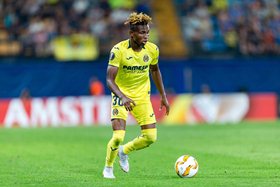 Super Eagles invitee Samuel Chukwueze became the fifth youngest Nigerian to debut in La Liga when he was named in the starting line-up as Villarreal were held to a 1-1 draw by Levante on match day 11.
The winger's unexpected full debut on Sunday evening saw him overtake former Barcelona defender Gbenga Okunowo as the fifth youngest Nigerian to play in the Spanish topflight aged 19 years, 5 months, 13 days.
Okunowo was 19 years, 6 months, 1 day when he stepped out onto the El Sardinero turf as Barcelona played out a goalless draw with Racing Santander on August 30, 1998.
On his La Liga debut, Chukwueze had up to three clear goalscoring chances to net his maiden goal in the league and was impressive, so much so that manager Javi Calleja opted to leave the teenager on the pitch for the entire duration of the game.
Levante, who were without Moses Simon, took the lead after an unfortunate own goal from Ramiro Funes Mori but
Alvaro Gonzalez rescued a point for the Yellow Submarine in the third minute of stoppage time.
Chukwueze scored on his domestic debut for Villarreal's first team in a 3-3 draw with UD Almería three days ago.
He has now made five appearances for the Castellón outfit in all competitions this season.
Ifeanyi Emmanuel