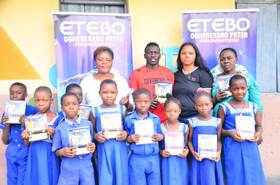 In continuation on his mission to better the lives of school boys and girls and giving back to the society, Super Eagles midfielder Oghenekaro Etebo through his Foundation will on Thursday, November 8, 2018 distribute more than ten thousand text books to 64 public primary schools in Delta State.
Coordinator of the project, NFF registered intermediary, Mr Endurance Iseri Ogbemudia said the exercise will run through Friday, November 9th 2018.
He said "Distribution of the materials will begin on Thursday and will be concluded on Friday due to the numbers of schools involved".
He continued by saying "Etebo's pledge to give back to the society is driving him and he is even prepared to do more as the responsibility of a responsible man they say is more responsibility".
The NFF licensed intermediary gave Kudos to the owner of Portuguese club CD Fereinse, (Etebo's former club), who also owns the fastest growing sports bet company in Nigeria Bet9ja and Remo Stars Football club  Hon. Kunle Soname for his contributions to the development of the Foundation.

It will be recalled that the Stoke City midfielder reached out to schools in July and distributed exercise books and other writing materials, and promised to do more.