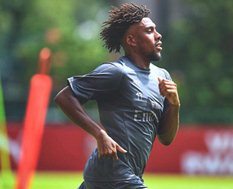 Arsenal's 1-1 draw with Liverpool last weekend means they have achieved twelve wins and two draws in their last fourteen matches across all competitions.
Alex Iwobi has credited manager Unai Emery for the Gunners impressive form and highlighted that the players have been working hard in training.
''It’s basically a family and we’re all fighting for each other, not just for the manager and the players, but also for the fans,'' Iwobi said to arsenal.com.
''It’s one big family and we’re always going to fight for each other. We’re putting in an extra shift, not just in matches, but in training as well.

''Unai’s very intense in training and he’s demanding because he knows how good we are. He always wants us to be at 100 per cent, giving our best.
''It’s not just him, though. We know what we expect from each other, so we’re also trying to get the best out of each other in training.''
Arsenal's unbeaten run started against West Ham and they recorded eleven straight wins in all competitions before dropping points against Crystal Palace on October 28.
Ifeanyi Emmanuel
Photo Credit : arsenal.com