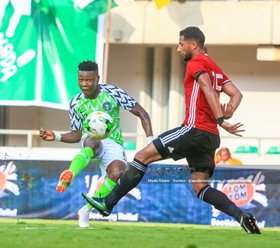 All the clubs that sent their scouts to monitor proceedings in Thursday's Europa League match between Bordeaux and Zenit St. Petersburg are now known.
Nigeria international Samuel Kalu was the most outstanding player on the Stade Matmut-Atlantique pitch, per Whoscored.com.
According to new information from girondins4ever.com, sixteen clubs were in attendance for yesterday's match day four fixture and the English teams are Wolverhampton Wanderers, Manchester United, Fulham, Newcastle United and Tottenham Hotspur.
Spanish powerhouse Barcelona and Atlético de Madrid, Villarreal, SD Eibar and Real Sociedad also sent their representatives to run the rule over the top players on both teams.
Rennes, Marseille, Saint-étienne, Paris Saint-Germain and Strasbourg scouted the opposition ahead of their games with Bordeaux in the French topflight, while Juventus came from Italy.
Samuel Kalu has a contract with Bordeaux, whom he joined from Gent, until the end of the 2022-2023 season.
Igho Kingsley