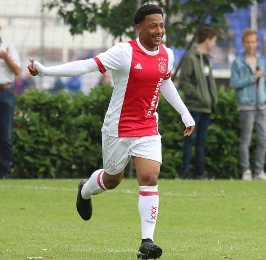 Nigerian wonderkid Dillon Hoogewerf continued his fine form in front of goal after scoring for Ajax Amsterdam in their 2-1 win over NEC Nijmegen/TOP in the Preliminary Round U17 Eredivisie on Saturday.
His 26th minute opener took his tally for the season to six goals in all competitions, including five in the league.
The only blemish to his season was that he was a little bit unlucky to be shown a red card on the hour mark against NEC Nijmegen/TOP after hitting an opponent with his elbow.
Hoogewerf is the leading scorer for Ajax Amsterdam's U17 team this season and only one youth-teamer has scored more goals than him.
With 12 goals to his name, Ajax U19 sensation Brian Brobbey is the top scorer for the the U15-U21 teams followed by Hoogewerf and U21 star Danilo Pereira who have both found the net six times each.
Dillon Hoogewerf's father is Dutch and he has a Nigerian mother which makes him eligible to play for the Golden Eaglets.
Ifeanyi Emmanuel
Photo Credit : Twitter.com/AjaxYA