Are We About To Have The First Player Born After 1999 U20 World Cup To Play For Eagles? Rohr Reacts 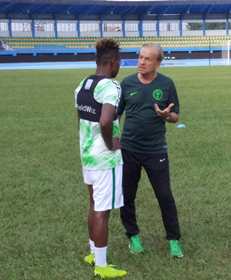 Super Eagles new invitee and Villarreal player Samuel Chukwueze is in line to get his first cap when Nigeria take on South Africa on Saturday in an AFCON qualifier in Johannesburg.
The former U17 star spent the first twenty minutes of Wednesday's training talking one on one with the head coach Gernot Rohr where the German tactician was seen giving detailed instructions to the player on what positions he should occupy on the pitch.

This could only suggest that the the Villarreal ace will have an important role to play on Saturday when Nigeria and South Africa clash in Soccer City.

Samuel Chukwueze came to limelight this season in the LA Liga where he has been the revelation of the season for Villarreal, starting and going the distance in three of their last four games before reporting for international duty.

After the training session,  Rohr played down the prospect of Chukwueze starting against South Africa but didn't rule out the fact the winger could play a part in Saturday's big match.


''Yes I spent a lot of time with Chukwueze but that's because he is new to the squad so I had to tell him what is expected of him,'' Rohr told allnigeriasoccer.com.
''He might have a role to play on Saturday but as of today I can't say whether he will be in the starting line-up.''
Chukwueze will become the first Nigerian player born after the 1999 FIFA U20 World Cup to debut for the Super Eagles if he gets playing time against South Africa.
Igho Kingsley
Latest News