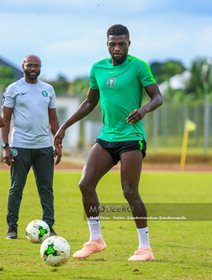 The Africa Cup of Nations qualifier between South Africa and Nigeria this weekend looks like a big opportunity for Hapoel Beer Sheva's John Ogu to start in midfield, with the suspension of Wilfred Ndidi and the nonavailability of Eddy Onazi and Obi Mikel.
One of the most experienced players in the team, Ogu has not started a competitive game for the Super Eagles since making the starting line-up against Uruguay in the 2013 Confederations Cup.
''Of course, that's why I am here, it's a very big game against a good side,'' Ogu said to allnigeriasoccer.com.
''I am here working hard, looking forward to the game and hopefully we will secure the three points.''
Two days ago, Ogu  tweeted about the quality of the younger players in the current Super Eagles team.
''With the young guys we have in the team, everyone is working, trying to blend with the older ones. I feel that the future is bright for our football.

''The most important thing for us now is to go to South Africa and try to win the game and secure our qualification to the Nations Cup that we've not been to for the past two editions.
''Everyone is working hard and looking forward to this game,'' Ogu concluded.
Ogu is competing with Ogenekaro Etebo, Mikel Agu, Semi Ajayi and Alex Iwobi for one of the spots in midfield against Bafana Bafana.
Ifeanyi Emmanuel
Latest News