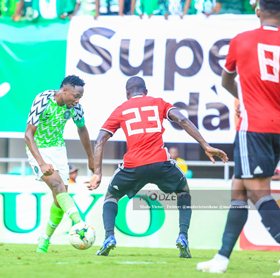 Super Eagles stand-in captain, Ahmed Musa says the team will be fine despite the injury induced absence of the quartet of Wilfred Ndidi, Odion Ighalo, Shehu Abdullahi and Francis Uzoho from the tough match against South Africa at the FNB Stadium on Saturday.

The Eagles will hope to fly past Bafana Bafana without the presence of their top scorer, best defensive midfielder, utility player and number one keeper in the Africa Cup of Nations (AFCON) qualifier.

"Anyone that is called up want to always give his best. We aren't carried away in our responsibilities."

"They (Ndidi, Odion, Shehu and Uzoho) are very important to the team. We don't need to dwell on their absence but focus on the big one," Ahmed Musa said at a press gathering attended by allnigeriasoccer.com.

"We want the maximum points. I was part of the team that won the AFCON 2013 in South Africa. I haven't lost in South Africa and won't be a loser here."


"I can't wait to play at the FNB Stadium and lead the Super Eagles to three points. If we qualify we have a lot of hurdles to cross in Cameroon," he added.
The former CSKA Moscow, VVV Venlo and Leicester City striker says the Eagles aren't dwelling on the embarrassing defeat to Bafana Bafana in day one of the qualifiers.

"The loss in Uyo is past tense. They (South Africa) have a good team. It won't be an easy game for us."

With the Super Eagles having been promised $25,000 for each goal scored, Musa says the major focus is the maximum points.

"We are focused on the game. We aren't after the cash, we are here for the three points."

"Our target is to qualify for the competition. We have the youngest team in Africa. We have a lot of work to do. Everyone is ready to play and defend the pride of Nigeria. ''
Abayomi Ademetan