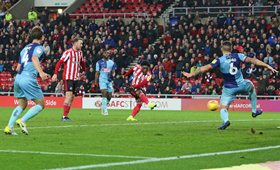 Catch up on the Nigerian players that were on target for their English clubs in Football League matches on Saturday, November 17.
At the Stadium of Light, former Super Eagles invitee Josh Maja took his tally for the season to eleven goals in all competitions after finding the net for Sunderland in a 1-1 draw with Wycombe Wanderers.
On 67 minutes, a free-kick into the box was headed down into the path of Fred Onyedinma, who lashed home to give the visitors the lead.
Six minutes from time, Maja controlled a low cross inside the area before smacking home.
According to the statisticians at OPTA, Maja is the first teenager to score 10 league goals in the top four tiers of English league football this season.
At Stadium mk in Buckinghamshire, Milton Keynes Dons got three points on the board with one-time Nigeria Football Federation target Chuks Aneke scoring his seventh goal in nine games in a 2-0 win vs Macclesfield Town.
After a goalless first half, the Arsenal Academy product broke the deadlock in the 52nd minute, curling past goalkeeper O'Hara after receiving a pass on the edge of the box.
MK Dons are top of League Two with 37 points from 18 games courtesy of their win over Macclesfield Town.
Igho Kingsley
Photo Credit : safc.com