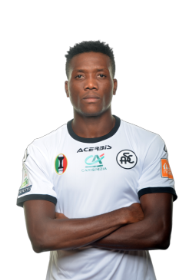 Round up of the Nigerian players on target for their respective clubs in matches across Europe on Sunday, November 18.
Promising striker David Okereke has now been directly involved in 7 goals from nine appearances in the Italian Serie B this term after netting a brace and providing an assist for Spezia in their 3-1 win against Benevento.
The 21-year-old opened the scoring in the 11th minute before setting up Matteo Ricci for his team's second goal, then closed the scoring on 58 minutes.
Over to the Portuguese Segunda Liga, in-form striker Christian Irobiso made it three goals in four matches in the division after netting the winner for Sporting Farense in a hard fought 1-0 win against Mafra.
The former CF União Madeira, FC Paços de Ferreira and CD Cova Piedade man struck five minutes after the restart.
In Scandinavia, Varbergs BoIS FC retained their status in the Swedish Superettan by beating Oskarshamns AIK 2-0 at Påskbergsvallen.
Emeh Izuchukwu scored a crucial opening goal for the home team in the 20th minute.
Igho Kingsley
Photo Credit : acspezia.com