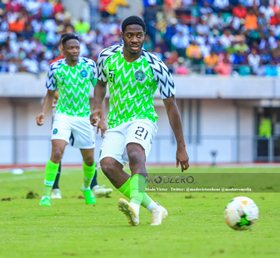 Allnigeriasoccer.com has been informed that Chelsea loanee Kenneth Omeruo will play no part in Tuesday afternoon's friendly between the Super Eagles and Uganda that will hold at the Stephen Keshi Stadium in Asaba.
The CD Leganés central defender has been excused from the game for personal reasons.
The second player confirmed out of the friendly is Brighton & Hove star Leon Balogun who didn't travel with the team to Asaba.
The remaining 21 players who made the trip to Johannesburg were seen embarking from the plane that brought the team to the Delta State capital on Sunday morning.
Omeruo and Balogun played the full duration of Nigeria's 1-1 draw with South Africa at the FNB Stadium, a result that guaranteed a spot at the Africa Cup of Nations finals in Cameroon.
Meanwhile, Chelsea loanee Ola Aina is doubtful to win his seventh international cap against Uganda due to inflammation of the heel and this ailment kept him out of the match day squad against Bafana Bafana, according to coach Gernot Rohr.
Rohr told Sporting Life Nigeria :  ''We have a little injury, Ola Aina’s inflammation on the talon''.
The Super Eagles players were given today off to relax after arriving back and will hold their last training on Monday.
Ifeanyi Emmanuel