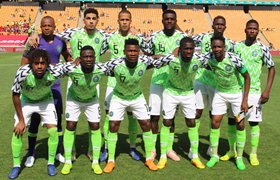 Enyimba goalkeeper Ikechukwu Ezenwa has said that the Super Eagles are looking for a win when they face Uganda in an international friendly at the Stephen Keshi Stadium on Tuesday.
Ezenwa has echoed the statements of manager Gernot Rohr and captain Ahmed Musa, who had earlier stated that preparations for the Africa Cup of Nations have to begin now, bearing it in mind that the international match calendar is closed until March 2019 when they take on Seychelles in a dead rubber AFCONQ.
''We are focused ahead of the game because it is a way of building confidence in the team because preparations for the AFCON have started,'' Ezenwa was quoted as saying by Channels Television at the end of training on Monday.

''There is no more FIFA window break before the kickoff of the AFCON, so we have to use this to start the buildup of the AFCON.

''Today, the team is working together that is why we got at least one point that made us to qualify.

''We are focused and we know the importance of every game we play, this game against Uganda we have to take it as a celebration game, to win for our fans, make them happier, to know that we are ready for the AFCON.''
Ikechukwu Ezenwa will play no part in today's friendly against the Cranes, according to Gernot Rohr.
Ifeanyi Emmanuel