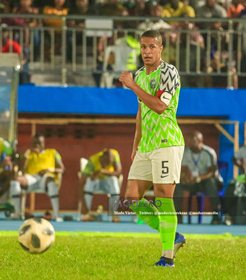 Super Eagles players let loose wads of Naira notes and threw them at adoring fans after their international friendly against the Cranes of Uganda at the Stephen Keshi Stadium, Asaba on Tuesday evening.

Enyimba goalkeeper Ikechukwu Ezenwa started the 'cheerful giving' before some of his teammates followed suit.

The demanding fans had refused to clear the path for the bus carrying the players to follow the convoy of cars with policemen inside them.

The fans were particularly impressed by the performance of Porto's Mikel Agu who hitherto had been much maligned.

In their final game of 2018, the Super Eagles were held to a goalless draw by The Cranes, who also secured progression through to the showpiece event in Cameroon next summer after a 1-0 vs Cape Verde last weekend.


Nigeria's next game comes up in March 2019 against Seychelles, a dead rubber Africa Cup of Nations qualifier.
Izuchukwu Okosi