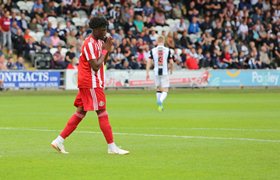 Three Premier League clubs have entered the race to sign Nigerian starlet Josh Maja, according to reports.
The Mirror says champions Manchester City, Tottenham Hotspur and Southampton are monitoring the situation of the prolific striker who comes off contract with Sunderland at the end of this season.
Bristol City are among the Championship sides credited with an interest in Josh Maja.
The 19-year-old is having an outstanding season and became the first teenager to reach double figures in the top four divisions in England this season after finding the net against Wycombe Wanderers on Saturday.
The Black Cats want to extend his stay at the Stadium of Light but contract talks have not led to an agreement.
Josh trained with Manchester City before he was offered a scholarship at Sunderland in 2015 and his younger brother Emmanuel Maja trialed with the Citizens in April.
In March 2017, he visited the Super Eagles players at their get-together in London but could not train with the team due to club commitments.
Ifeanyi Emmanuel
Photo Credit : safc.com