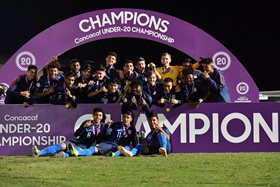 United States U20 international of Nigerian descent, Ayo Akinola has been recognized for his outstanding performance in the recently concluded CONCACAF Under-20 Championship after he was included in the Team of the Tournament.
The Toronto FC winger helped the United States to successfully defend their title and qualify for next year's FIFA U20 World Cup in Poland.
CONCACAF's technical study group has selected the top eleven players in each position, with Akinola picked as the number one right winger in a 4-3-3 formation.
The 18-year-old appeared in all the eight games contested by the United States during the three-week tournament, scoring an impressive 7 goals and providing one assist.
Akinola was among the eight United States players named in the Best XI selection.
Last season, he signed a Homegrown contract with Toronto FC and played four games for the Canadian club in Major League Soccer.
Igho Kingsley
Photo Credit : ussoccer.com