...the complete Nigerian football portal
Subscribe
'I Spoke To Iheanacho, He Said There Was No Contact' - Watford's Success Insists Capoue Was Harshly Sent Off
Published: December 01, 2018 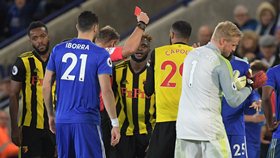 Isaac Success has stated that his teammate, Etienne Capoue, was harshly sent off in the closing minutes of his Watford's 2-0 loss to Leicester City at the King Power Stadium on Saturday evening.
The Frenchman received his marching orders after what appeared to be a strong two-footed challenge on Kelechi Iheanacho, but Success has suggested that referee Graham Scott made the wrong call, with the Foxes number eight admitting that there was no contact made.
Success expects Watford to request an appeal of the red card issued to the midfielder who could be suspended for up to three games if he is found guilty.
''I spoke to Iheanacho and he said there was no contact by Capoue,'' Isaac Success said post-match, according to Watford's official Twitter page.
''I feel sorry for him because he has been one of our best players. Let's see what the FA will do because it was never a red card.''
Isaac Success was shown a yellow card five minutes before the dismissal of Etienne Capoue, his first caution since September 2 against Tottenham Hotspur.
Ifeanyi Emmanuel
Photo Credit : watfordfc.com