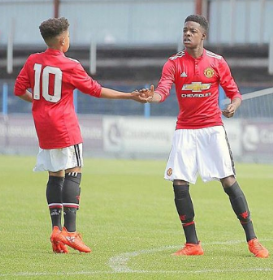 Allnigeriasoccer.com has been informed that prolific Nigerian striker Mipo Odubeko is set to pen a new deal with Premier League powerhouse Manchester United.
Odubeko is United's top striker playing below the U18 age group and the Old Trafford outfit are keen to ensure he stays at the club after offering him a scholarship deal.
The new deal will be activated before the start of the 2019-20 campaign, on July 1, 2019 and will run until the summer of 2021.
A Republic of Ireland youth international, Odubeko joined Manchester United from St Joseph's Boys and rose through the ranks before his promotion to the club's U16 and U17 teams.
It is envisaged that he will be promoted to the Red Devils U18 team for the 2019-2020 season.
The number of goals Odubeko has scored for Manchester United's youth teams this season are too many to count and he has added assists to his game of recent.
Ifeanyi Emmanuel
Photo Credit : manutd.com