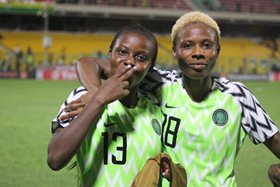 Super Falcons captain Rita Chikwelu has ended speculation about her future after penning a new deal with Swedish Damallsvenskan club Kristianstads DFF, allnigeriasoccer.com reports.
The agreement between club and player will see the attacking midfielder remain at Kristianstads DFF until the end of the 2019 season.
Chikwelu had stops at FC United and Umeå IK, where she spent six years, before joining Kristianstads DFF in 2017.
In other confirmed transfer news, one of the unsung heroines for the Super Falcons in their recent Africa Women Cup of Nations trump, Halimatu Ayinde has penned a one-season deal with Eskilstuna United DFF in Sweden.
The central midfielder was on the books of Asarum last season and previously played for American club Western New York Flash and Belarusian team FC Minsk.
Finally, veteran midfielder Ogonna Chukwudi, who was sensationally dropped from the 2018 AWCON roster by manager Thomas Dennerby, has found a new team.
The 30-year-old has put pen to paper on a deal with Djurgården Fotboll, who compete in the Damallsvenskan.
Ifeanyi Emmanuel