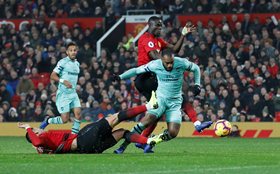 Manchester United and Arsenal settled for a 2-2 draw in a thrilling English Premier League match on Wednesday night.

Super Eagles playmaker, Alex Iwobi was  named in the starting line up by Gunners boss Unai Emery at Old Trafford.

The Arsenal youth product struggled for most part of the game though he was involved in few moves orchestrated by the visitors at the Theater of Dreams.

He was sacrificed for Alexandre Lacazette some minutes after the hour mark.

United produced a valiant comeback to register a draw with Southampton at the weekend, but Jose Mourinho's side headed into this fixture without a win in three games in the top flight.

Arsenal - on the other hand - were unbeaten in their last 12 matches in the Premier League, and had not suffered defeat in any competition since the second weekend of the season.

The Gunners held an eight-point advantage over United ahead of Wednesday's showdown at Old Trafford.

Arsenal took the lead and the defending and goalkeeping was abysmal. Mustafi mistimed a free header from a corner and it should be easy work for David De Gea, However, the Spaniard fumbled the ball behind him and it went just over the line, despite the best efforts of a defender.

United gave a perfect response. A free kick from Marcos Rojo was well saved by Bernd Leno but Ander Herrera was able to get the ball back across goal for Anthony Martial to fire home from close range.

At halftime, it was 1-1. Arsenal took the lead in calamitous circumstances. Mustafi was able to free himself of his marker at a corner but the German miscued a header straight at De Gea. However, the Spaniard somehow managed to fumble the ball behind him and just over the line.

It took United just four minutes to equalise. Leno did well to save a free kick from Rojo but Herrera was quickest to react and after the ball was sent back into the danger area, Martial had the easy job of firing into the net from six yards out.

The visitors retook the lead and again in the 68th minute, it was a weird one. Lacazette played a one-two with Henrikh Mkhitaryan and although Rojo got across to prevent the shot, he could only kick the ball against the Frenchman and the ball found the bottom corner.

Some of the defending in this game had been appalling and it was no different when the hosts levelled shortly after. Straight from the kickoff, the ball was sent forward and after Kolasinac diverted the ball back towards his own goal, Jesse Lingard reacted fastest to poke a shot past Leno.

Arsenal put together a fine move down the right with Mkhitaryan deceiving two players before crossing for Lucas Torreira, who saw a first-time effort well saved by De Gea. Mkhitaryan produced the most brilliant of finishes from the rebound but he was a yard offside in the 90th minute of action.