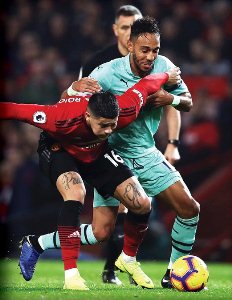 Alex Iwobi was frustrated in the wake of Arsenal's 2-2 draw with Manchester United at Old Trafford on Wednesday night and has given a key reason why Unai Emery's side could not secure all three points.
Each time Arsenal took the lead, the home team managed to equalise almost immediately and Iwobi reckons they could have gotten a better result if the players were one hundred percent focused.
Shkodran Mustafi broke the deadlock on 26 minutes, before Anthony Martial restored parity four minutes later.

On 68 minutes, Arsenal were back in front through Alexandre Lacazette who replaced Iwobi but Manchester United leveled through Jesse Lingard seconds later.
''We knew it was going to be a difficult game because Old Trafford is always a tough place to come,'' Iwobi told arsenal.com.
''I guess it’s a hard one to take because we were ahead twice. Both teams fought hard, though, so I guess a draw is a fair result for both teams.''
On what the players could have done to get a win, the Gunners number 17 said : ''Maybe it’s just a mental thing of staying focused. We got a bit excited and tried to rush forward where we shouldn’t have. Maybe it’s about just making sure we settle things down a bit.''
Yesterday's tie against United was Iwobi's 18th appearance of the season for the Gunners in all competitions.
Igho Kingsley
Photo Credit : arsenal.com