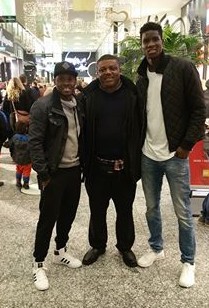 Nigeria's leading scorer in the European Leagues for the 2018-2019 season only, Paul Onuachu, will certainly not increase his goal tally when Midtjylland tackle OB in the Danish Super Liga on Friday evening.
The lanky striker will not be on parade at the MCH Arena as he has been left out of FCM's provisional roster due to an undisclosed ailment.
Midfielder Frank Onyeka and winger Rilwan Hassan are both available for selection and have been included in the squad list by manager Kenneth Andersen.
Onuachu is having an outstanding season at the Danish champions, with ten goals in 16 matches in the Danish topflight, which makes him Nigeria's top scorer in Europe for the 2018-2019 campaign.
In addition to his 10 strikes in the league, the 24-year-old scored two goals in the Europa League qualifiers and found the net once in the Cup.
Nigeria's top scorer in Europe's top 10 leagues is Wolfsburg loanee, Victor Osimhen with 7 goals for RSC Charleroi.
Ifeanyi Emmanuel
Latest News