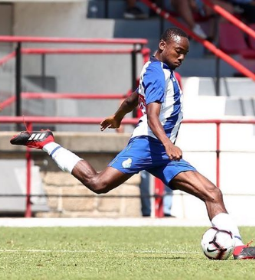 Kelechi Nwakali would be aiming to break into Porto B's starting line-up in the coming weeks having impressed off the bench for the Portuguese setup in the Segunda Liga in recent matches.
The former Golden Eaglets and Flying Eagles skipper was involved for Porto B in their first four games of the season but lost his spot after returning to Portugal from Nigeria, where he went to process a work permit.
Nwakali has made Porto B's match day squad in four of their last five matches in the division, most recently against Académica when he was introduced in the 81st minute with the Rui Barros led side leading 3-0.
The attacking midfielder came close to opening his account for Porto B with a brilliant low free-kick from 25 yards out which struck the post in the 88th minute.
A brace from Gleison and Rúben Macedo's first half strike secured Porto B their third win of the season.
2013 Fifa U17 World Cup winning winger Musa Yahaya is out of favour at Porto, having made only one appearance in eight games for the reserve team.
Ifeanyi Emmanuel