...the complete Nigerian football portal
Subscribe
Hertha BSC's Torunarigha One Of The Two Most Outstanding CBs In The Whole Of Germany WK 14
Published: December 10, 2018 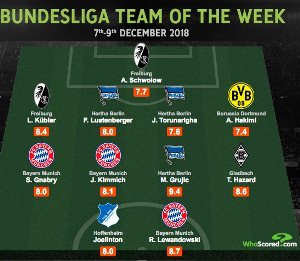 Hertha BSC young defender Jordan Torunarigha has been selected in the Team of the Week for the German Bundesliga.
This is the second week in a row that the German U21 international has been named in the best eleven players in the German topflight as he was also selected for his impressive performance against Hannover 96 in which he scored and provided an assist in a 2-0 win.
In the Team of the Week announced by Whoscored on Monday, Jordan Torunarigha was partnered in central defense by Hertha BSC teammate Fabian Lustenberger, a player older than him by nine years.
Against Eintracht Frankfurt (1-0), Torunarigha helped goalkeeper Rune Jarstein post a shutout for the second successive match in the topflight.
The 21-year-old made seven clearances against Eintracht Frankfurt, with two tackles, two interceptions and three blocked shots.
On a scale of 1-10, Torunarigha was awarded a rating of 7.61 for his efforts.
Ifeanyi Emmanuel