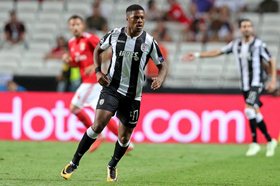 PAOK went seven points clear at the top of the Greek Super League standings following their hard-fought 2-1 win against Larissa at Stadio Toumbas (Thessaloníki) on Sunday evening.
A 70th minute strike from former Arsenal attacker Chuba Akpom proved to be the winning goal and earned PAOK their 12th win from 13 matches in the division.
Nunič put the visitors ahead on 36 minutes but with almost the last kick of the half, Prijović equalised before Akpom made it 2-1 three minutes after coming off the bench.
Reacting to his goal, Akpom told NOVA : ''It was a very moving moment I wanted to go in to play and to score was what I wanted.
''As I have said before, I want to grab the opportunity every time. This is my goal. We do not look at the other teams and the difference we have, we look at PAOK, our team.''
Akpom has scored 2 goals in six league matches as a substitute for PAOK and has logged 116 minutes.
Igho Kingsley
Photo Credit : paokfc.gr