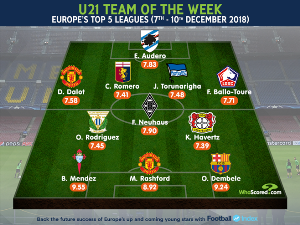 Nigerian starlet Jordan Torunarigha has been named in the U21 European Team of the Week for the second week running.
The Hertha BSC central defender has been selected in the best rated XI from Europe’s top five leagues, comprising only of players aged 21 and under by Whoscored.com.
Against Eintracht Frankfurt (1-0), Torunarigha helped goalkeeper Rune Jarstein post a shutout for the second successive match in the topflight.