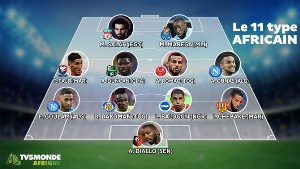 Brighton & Hove defender Leon Balogun has been named in the African Team of the Week for the latest round of matches in the main European Leagues.
French pay television network TV5Monde, with headquarters in Paris, France, selected the eleven most outstanding Africans for each position with Balogun picked as one of the two central defenders.
Players from eight different African countries have been named in the selected XI, including Liverpool's Egypt striker Mohamed Salah who was named the African Player of the Week on the back of his hat-trick against Bournemouth.
On Balogun, they wrote : ''25 seconds. That's the time it took for Leon Balogun to score in Brighton's victory over Crystal Palace (3-1) on Tuesday night.
''Barely out of the bench, the Nigerian international defender scored to give the Seagulls a 2-0 advantage.
''What a relief to Balogun who remains one of the starting eleven of Super Eagles coach, Gernot Rohr, despite a limited playing time.''
This season, Balogun, 30, has made five Premier League appearances, logging 321 minutes and was an unused substitute in 11 matches.
Igho Kingsley