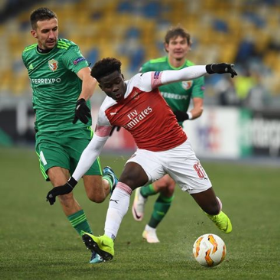 Young Nigerian winger Bukayo Saka is in contention to make his home debut for Arsenal in Thursday night's Europa League clash against Qarabağ at the Emirates Stadium in London.
The 17-year-old was pictured training with other first-teamers in the Gunners final workout held at London Colney on December 12.
Saka became the youngest player of Nigerian descent to debut for Arsenal and also play in the Europa League after coming off the bench for the final 22 minutes against Vorskla Poltava on November 29, aged 17 years, 2 months, 24 days.
With Arsenal U18s in action against Northampton Town in the third round of the FA Youth Cup tonight, there is a strong probability of Saka making the provisional roster against Qarabağ if he doesn't feature against the Cobblers.
Unai Emery's side are already through to the last 32 of the Europa League as group winners and the Spanish tactician might decide to rest some key players ahead of Sunday's visit to Southampton.
An England U19 international, Saka has been involved in 9 goals (4 goals, 5 assists) in 13 league matches for Arsenal's youth teams this term.
Ifeanyi Emmanuel
Photo Credit : arsenal.com