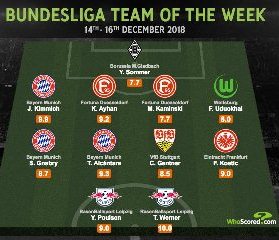 A player with Nigerian blood flowing in his veins has been named in the Bundesliga Team of the Week for the third week running.
The list published by football statistics website Whoscored is dominated by Bayern Munich stars and also includes Wolfsburg starlet Felix Uduokhai but there's no place for Hertha BSC's Jordan Torunarigha who made the Team of the Week for game week 13 and 14.
Uduokhai lined up on the left side of defense in Wolfsburg's 2-0 win at FC Nuremberg on Friday, December 14, his second straight start in the 2018-2019 campaign.
The Germany U21 international, who is on the radar of the Nigerian Federation and manager Gernot Rohr, recorded an impressive nine tackles against Nuremberg, which was a game high.
He made three interceptions and was also a handful for the strikers after winning a game-high four fouls.
Mainz strikers Anthony Ujah and Karim Onisiwo were the other Nigeria-eligible players in action in the Bundesliga this past weekend.
Ifeanyi Emmanuel
Latest News