...the complete Nigerian football portal
Subscribe
Bukayo Saka: The Next Tug of War Between Nigeria And England?
Published: December 18, 2018 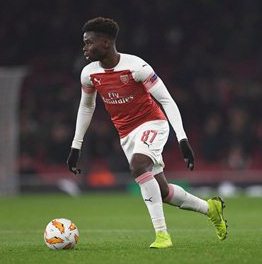 Arsenal have always pride themselves as a club that does things with class.

They have a rich history just like few clubs in England to produce great talents in their youth ranks.

Another rising star in the team's armoury is Bukayo Saka, the young England youth international with Nigerian blood running deep in his veins.

Saka was in electrifying form when the Gunners defeated Qarabag 1-0 in their last Europa League Group E game on December 13.

He was similarly impressive in the previous Europa League game against Vorskla Poltava. The game against Qarabag particularly stands out.

The nimble footed forward was named The Man of the Match and was duly praised by Arsenal head coach Unai Emery for his explosive performance.

"Today Saka also played with a good performance, with a very big personality and we were speaking at half-time,'' the Spanish tactician said.

''His personality is very important for us to continue trying to go 1v1 and break lines with his quality.''

Saka has indeed been very positive and impressive just like allvideoslots.com with a huge promise to do better.

Saka is expected to be in Arsenal's squad for Wednesday's quarterfinals Carabao Cup (League Cup) match on Wednesday against Tottenham Hotspur after he was omitted from the U-23 team's match against Blackburn Rovers.

The promising career of this sprightly bright lad beggars the question if the Nigeria Football Federation can convince him to play his senior international football for Nigeria where  he has his roots and not England his adopted home.

Bukayo is a boy whose start to his career may be a bit challenging which somewhat explains the meaning of his name but the end looks promising.


He must not be allowed to be another one that got away. His blood bleeds Nigeria!
Izuchukwu Okosi
Photo Credit : arsenal.com