...the complete Nigerian football portal
Subscribe
'He Was Very Good Before He Got Injured'- Arsenal Legend Ljungberg Happy To Have Nigerian Winger Back
Published: December 19, 2018 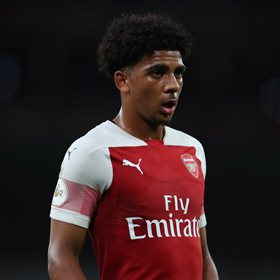 Arsenal legend Freddie Ljungberg was delighted that Nigerian winger Xavier Amaechi has returned to action after more than three months on the sidelines.
Ljungberg's Gunners U23 side were humiliated 4-0 by Blackburn Rovers in their latest game in the Premier League 2 but the positive thing to take out of the game is that Amaechi came through his comeback match unscathed after lasting 26 minutes on the Meadow Park turf.
The Hale End Academy product is highly regarded at the Emirates and would have been considered for a first team debut in the Europa League if not for his injury problems.
''Of course he’s been a big miss. He had a stress fracture and so did Robbie, so we’ve had quite a few long-term injuries,'' Ljungberg told arsenal.com.
''That was probably the highlight of the day when he came on. He was very good before he got injured but I think he only played three games before he got injured, so he needs to go slowly when he comes back into it.
''He will be a very, very good player but he needs to work because he’s missed a few months of football unfortunately.''
Xavier Amaechi, 17, penned his first professional contract with Arsenal in January 2018, five years after joining the club from London rivals Fulham.
Ifeanyi Emmanuel
Photo Credit : arsenal.com