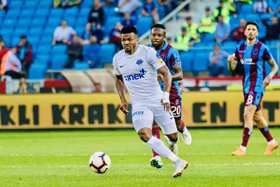 Out of favour Super Eagles striker Emem Eduok was on target in Kasimpasa's 4-1 rout of Menemen Belediyespor in the fifth round of the Turkish Cup on Wednesday afternoon.
With his pass for Kasimpasa's third goal scored by Erboğa, he reached double digits cumulatively for goals and assists since the start of the season, before he made it 4-0 in the 71st minute.
Eduok now has a hand in 11 goals (6 goals and 5 assists) beating his previous personal record of nine goals which he set during the 2016-2017 and 2017-18 campaigns since moving to Europe.
It is interesting to note that the 24-year-old has played as a winger this season and has achieved a new personal record halfway through the season.
The former Esperance and Dolphins man has not been invited to the Super Eagles since debuting against Tanzania in an Africa Cup of Nations qualifiers back in 2015.
He was a member of the Flying Eagles squad at the 2013 FIFA U20 World Cup in Turkey.
Ifeanyi Emmanuel