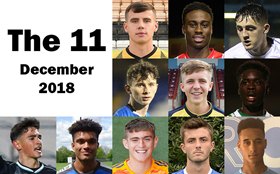 Two Nigerian teenagers, Lincoln City striker Jordan Adebayo-Smith and Yeovil Town defender Daniel Ojo, have been recognized for  their on and off the pitch achievements after they were named in the League Football Education (LFE) 'The 11'.
Eleven apprentices have been recognized in the December edition of 'The 11' for their outstanding efforts across all aspects of the apprenticeship programme.
Ojo, 17, penned his first professional contract with Yeovil Town two weeks ago after making his senior debut against West Ham U21s in the Checkatrade Trophy last month.
California-born Adebayo-Smith has been named in the match day squad for Lincoln City's first team on five occasions since his summer move and debuted for the first team in the recent Checkatrade Trophy game against Accrington Stanley.
The East Soccer Base Academy product is known to be on the radar of Premier League pair Huddersfield Town and Wolverhampton Wanderers in the January transfer window.
Akin Famewo (Luton Town), Hakeem Odoffin (Northampton Town), Hakeeb Adelakun (Bristol City) and England U20 World Cup winning winger Ademola Lookman have all previously been named in 'The 11'
Ifeanyi Emmanuel
Photo Credit : lfe.org.uk