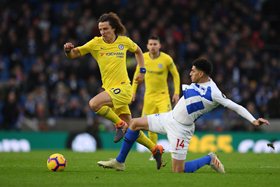 
It was mixed reactions for out of favour Super Eagles midfielder Ogenyi Onazi after Sunday's Turkish Super Lig game against Besiktas.
The Nigerian assisted fellow Nigerian Anthony Nwakaeme's goal but inadvertently conceded an own goal.
Nonetheless his regular playing time counts for something and he had another good game over the weekend barring the own goal. That is a huge reason why his international career cannot end just yet.

Onazi should return to the Super Eagles fold.


2. Leon Balogun Must Redeem Self In Subsequent Brighton Game(s)

Brighton were defeated 2-1 by Maurizio Sardi's Chelsea with goals scored by Pedro and Eden Hazard.

Hazard's goal was aided by Nigeria's Leon Balogun whose sloppy pass  from almost the centre circle was intercepted by Willian. The Brazilian found Hazard and the Belgian  raced away and finished emphatically.

Solly March's goal afterwards proved to be only a consolation for the Seagulls.

Balogun must cut out or reduce such errors leading to goals from his game especially now that he still has one more game to convince Chris Houghton that he deserves to play more as Shane Duffy serves the last of his games ban.


3. Good Shows By Serie A Boys, Ekong And Aina

Udinese lost narrowly 1-0 to Inter Milan just as as Torino were edged by city rivals Juventus.

Cristiano Ronaldo's penalty saved the day for the Old Lady and Chelsea loanee Ola Aina was not awed by the superstars paraded by the Series A leaders.

It was a weekend for Gernot Rohr to be proud of his defensive players.

Ekong was imperious in the centre of defence in the 3-5-2 formation his manager like to implement and that is good news for the Nigerian national team.

Injuries are part of the game but we all hope that the top scorer in the history of the FIFA U-17 World Cup with 10 goals, all scored in the 2015 U-17 World Cup in Chile does not start suffering career threatening goals at this stage of his career.

Charleroi head coach Felice Mazzu alluded that the Nigerian  who had scored eight league goals this season has been the target of bad tackles from defenders and need the referees' protection in an interview with Belgian website dhnet.be.

We have seen young players' career cut short by injuries and certainly would hope that will not be the narrative for the 19 year-old on loan from Bundesliga side Wolfsburg who was in the Super Eagles side held scoreless by Uganda in the friendly at the Stephen Keshi stadium on November 20.
5. Can Iheanacho, Success Be Good Backups For Ighalo, Vardy And Gray?

The duo of Kelechi Iheanacho and Isaac Success fired blanks in Leicester and Watford's Premier League games against Crystal Palace and Cardiff City.

Leicester were defeated 1-0 by Palace while Watford won 3-2 over Cardiff with both Nigerians coming off the bench and not getting on the scoreboard.


Eyebrows have been raised about Iheanacho's games of  late  and his readiness to play as the 'number 9' for club and country in place of Odion Ighalo and Jamie Vardy.
He has not quite seized the opportunities presented to him mostly by the injuries to both men at his club and national team.
One league goal in 16 matches tell the whole story.

Success  on his part who was a great foil for Iheanacho in their Golden Eaglets days especially at the 2013 FIFA U-17 World Cup has also not covered himself in glory with Andre Gray's injury now proving inconsequential.

For Success, it is also one league goal scored in 17 matches.