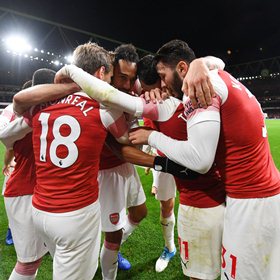 Liverpool legend Jamie Redknapp has criticized Unai Emery's substitution of Alex Iwobi in Arsenal's 2-0 loss o Tottenham Hotspur in the quarterfinal of the League Cup on Wednesday night.
Redknapp, who won the League Cup with Liverpool in 1995, has suggested that it was unwise for the Spaniard to replace Iwobi with Lacazette in the 58th minute because the Nigerian was making things happen in attack.
Although Iwobi is a young player with unquestionable talent, on the flip side he has a a tendency to be inconsistent and was singled out for criticism by the Gunners fans and a section of the media yesterday, but Redknapp saw things differently.
Sky Sports pundit Redknapp said : ''I'd love to know his thinking (behind the substitution). Iwobi was always a threat, always looking to provoke, looking to do something with the ball, I think it was a major blunder taking him off."
This season, Iwobi has scored one goal in 21 appearances for Arsenal in all competitions and has five assists to his name.
Unai Emery's side, who have lost their last two matches, welcome Burnley to the Emirates on Saturday.
Igho Kingsley
Photo Credit : arsenal.com