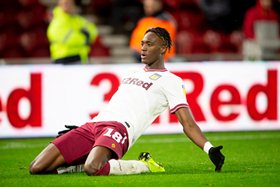 Chelsea are planning to sell English-born Nigerian striker Tammy Abraham in the January transfer window, according to reports.
The Evening Standard says Chelsea are believed to be considering cashing in on Tammy Abraham’s good form on loan at Aston Villa by selling him next month.
Abraham has had a blistering start to his career at Aston Villa, netting 12 goals in 16 league matches and won the Championship Player of the Month prize for November 2018.
The England U21 international almost joined Newcastle United in the summer of 2017 but it was Swansea City that won the race for his signature.
The Magpies are still attracted by Abraham's goalscoring qualities and will attempt to sign him again next month but face competition from Crystal Palace, who have also been linked with another Nigerian striker in Dominic Solanke.
Abraham joined Chelsea at U8 level and has played three games for their first team.
Igho Kingsley
Photo Credit : avfc.co.uk