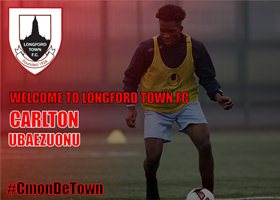 League of Ireland First Division club Longford Town have confirmed the signing of  Carlton Ubaezuonu on undisclosed terms.
The 20-year-old was born in  Johannesburg to Nigerian parents but has been living in the Republic of Ireland since a young age.
Ubaezuonu spent his formative years as a footballer with Ballyhaunis Community School team, Lough Harps and Malahide United.
His first senior club was Dundalk where he spent the last three years but had a loan spell at Galway United in 2018.
Last season, the winger scored 4 goals in 26 appearances for Galway United in the Irish First Division.
Ubaezuonu could make his competitive debut for Longford Town in their league opener against Limerick on February 22, 2019.
Igho Kingsley
Photo Credit : ltfc.ie