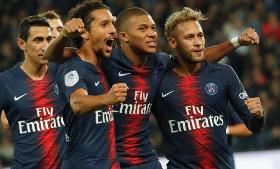 The football season is in full swing, and now is the best time to not only follow the matches featuring the best players of our time, but also to make such matches a stable source of your income.

Let’s pay attention to the championship of France, which many fans for some reason underestimate.

Yes, there is a clear hegemony of PSG, but it is interesting to follow the matches of other clubs.

As for the Parisians, we can safely say that by the middle of the championship they had already booked the first place in the season for themselves.

Bet live football - 1xbet.co.ke is a great chance to regularly win solely thanks to your own knowledge.

It is also easy to follow the livescore today at https://1xbet.co.ke/live/. Often, they play a decisive role in predicting the correct outcome of a match or for various statistical indicators.


Sports betting https: //1xbet.co.ke is becoming increasingly popular among ordinary bettors.
This is not surprising, because we offer a huge variety of options for forecasts.

The fact that Thomas Tuchel's squad has confidently reserved the first place for themselves does not surprise anyone.

However, let's take a closer look at the trumps that the capital team has. These include:

1.Best selection of players in Ligue 1. No other French club has such a bunch of stars. Thanks to this, Tuchel can make rotations, as well as play in the championship and in the international arena with virtually two different teams.

2.Individual skills of players. With such stars as Neymar, Mbappe, Cavani, Di Maria, Draxler, Verratti, it is not surprising that the team is the undisputed favorite in almost every match.

3.Coaching decisions. The German mentor was appointed only this summer, but quickly managed to build his own game.

PSG already has its own recognizable style and, most importantly, the club continues to demonstrate a bright and attacking football that brings results.

We'll see if the current champions of France are lucky in the international arena, where they are to play against Manchester United in the 1/8 of the Champions League.

Now you have a great opportunity not only to watch the confrontations of these teams, but also to bet on their outcome.

Together with the reliable bookmaker, it has become even more profitable, because 1xBet offers high odds and quick payouts of winnings.


Join the market leaders right now to enjoy the matches in full and earn thanks to them.
Igho Kingsley
Photo Credit : PSG