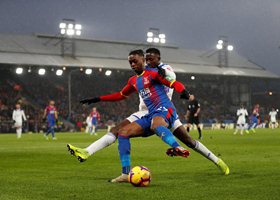 Ahead of Saturday's Premier League meeting between Chelsea and Leicester City at Stamford Bridge, Chelsea statistician Paul Dutton has presented key facts and figures.
Looking at the opposition, Dutton acknowledged Wilfred Ndidi as the top passer on the team with 905 from his seventeen appearances in the Premier League.
On the flip side, the Super Eagles midfielder can be regarded as the Foxes dirtiest player after conceding more fouls than any other player, 24 in total.
Nampalys Mendy (726), Ben Chilwell (692), Harry Maguire (677) and James Maddison (605) are behind Ndidi in the passing stats while Kelechi Iheanacho is in 14th position with 222.
Wes Morgan, Ben Chilwell, Ricardo Pereira, Nampalys Mendy and Iheanacho are among the top six players in terms of most fouls committed.
Ndidi faces a fitness race for Leicester City's trip to Chelsea after he suffered a knee injury against Manchester City in the League Cup three days ago.
Ifeanyi Emmanuel
Photo Credit : cpfc.co.uk