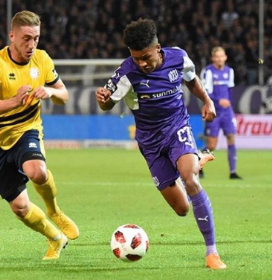 Allnigeriasoccer.com's round up of the Nigeria-eligible players that were on target in matches across Europe on Saturday, December 22.
In the German Bundesliga, Jordan Torunarigha celebrated penning a new contract with Hertha BSC by netting a consolation goal in his side's 3-1 loss to Bayer Leverkusen at BayArena.
The Germany U21 international reduced the deficit in the 26th minute, shortly after the home team netted their second goal.
That was the defender's fourth goal in a Hertha shirt in 29 appearances in the German top division.
Remaining in Germany, teenage right back Felix Agu scored his maiden professional goal as VfL Osnabrück registered a 2-1 win against Würzburger Kickers at flyeralarm-Arena.
The 19-year-old signed his first professional contract with VfL Osnabrück in May 2018.
In England, Wycombe Wanderers fell to a first league defeat in seven matches, losing 2-1 to AFC Wimbledon at Adams Park.
Fred Onyedinma kept the scoreline respectable after turning home a low cross from a teammate in injury time.
Remaining in the United Kingdom, Connah's Quay continue to top the standings in the Welsh topflight following their 6-1 annihilation of Cardiff MU.
The 32-year-old attacker Michael Bakare scored one of the fastest goals of his career when he gave Connah's Quay the lead after fifty seconds. It was his eighth goal of the season.
Ifeanyi Emmanuel
Photo Credit : vfl.de