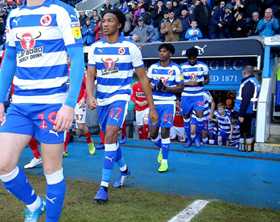 Central defender Gabriel Osho made his senior debut for Reading as they were beaten 1-0 by Middlesbrough at the Madejski Stadium on Saturday evening.
The 20-year-old was recalled from his loan spell with National League club Aldershot Town on December 6 , and was named in the match day squad against Rotherham United last weekend but was an unused substitute.
Osho was named in the starting XI  by caretaker boss, Scott Marshall against Boro and became the 49th player to graduate from the Reading Academy.
The debutant prevented Britt Assombalonga from scoring in the 17th minute by tracking back and blocking a shot from the Democratic Republic of Congo international.
Osho is widely regarded as one of the most promising players within Reading's Academy and his leadership and goalscoring qualities from his defensive position stand him out.
He put pen to paper on his first professional contract with Reading in September 2015.
Ifeanyi Emmanuel