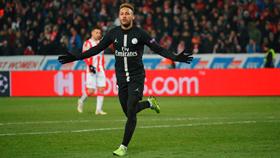 Brazil has long been known for being a football country. The phrase 'samba soccer' is often heard when referring to the Selecao and their stars.
With players like Pele, Ronaldinho, Kaka, and Ronaldo all hailing from the South American nation, Brazil has a strong track record of blessing the game with magical footballers.
With Ronaldinho's retirement, there is a new samba star in town.
Early Days


From a very early age, Neymar had begun to prove himself to be ahead of his peers.
He made Santos debut at just 17, winning numerous team and individual trophies along the way, including the South American footballer of the year in 2011 and 2012, as well as the 2011 Puskas award for his solo strike against Flamengo.
His impressive form at Santos saw him earn a call-up to the Brazilian national team. He made his debut against the United States, a match in which he opened the scoring. He has gone on to represent Brazil a further 104 times, recording 70 goals in the process.


In the summer of 2013, betting sites began slashing odds on Neymar's transfer as Santos confirmed it had received two offers for their star man.
Neymar's agent and father would subsequently confirm that his son would be joining Barcelona following the Confederations Cup in Brazil.
He would go on to sign a 5-year contract before being officially unveiled as a Barcelona player on 3rd June 2013, in front of 56,500 Barcelona fans at the Camp Nou.
It was at Barcelona where he truly established himself as one of the finest players of his generation.
Skills, goals, and more skills saw him immediately win the hearts of Barcelona fans everywhere as he made the left wing his own.
He would go on to record 9 La Liga goals in his debut season, including crucial strikes against rivals Real Madrid and Atletico.
2014 World Cup


Neymar would then play a starring role for Brazil at the 2014 World Cup, scoring four goals and leading Brazil to the semis. An injury in the quarter-final sidelined him from participating in the semi-final clash against Germany, a match Brazil will historically go on to lose 7-1, exiting the competition in shame and tears.
However, Neymar was one of the few Brazilians to have enhanced reputation during the tournament.
2014/15


He was handed the Brazil captaincy after the World Cup and ahead of the 2014/15 season.
The new season is considered Neymar's best ever as he successfully built on his strong debut campaign to lead Barcelona to an unprecedented second treble.
He formed a part of Barcelona's fearsome 'MSN' trio consisting of him, Messi, and the newly signed Luis Suarez.
The three South Americans would go on to smash numerous individual and collective records on their way to scoring 122 goals, 39 of which were Neymar's.
Barcelona would claim La Liga, Spanish Cup, and Champions League that season, with Neymar's goal in the Champions League final sealing victory over Juventus.
2015/16

The 2015/16 season would be Neymar's penultimate year at the Camp Nou. Barcelona would claim a domestic double of La Liga and Copa del Rey with its famed attacking trio breaking their previous record to finish the season on 133 goals.

In his final year, Neymar would put in Man of the Match display against Paris Saint-Germain to seal a famous 6-1 win in the first knockout round of the Champions League, and ensure progression after Barcelona had lost the first leg 4-1.

The team was then beaten by eventual finalists Juventus in the quarter-finals. It would also miss La Liga trophy which Real Madrid won, only winning the Copa del Rey final against Alves.


Amidst legal investigation over the nature of his move to Barcelona and some shift in personal ambition, Neymar decided it was time to move on.
With an ambition of someday winning the Ballon d'Or, he felt he might not achieve that feat playing alongside the world's best player - Messi.
Paris Saint-Germain broke the world record by paying €222 million for his transfer, thus opening a whole new chapter full of possibilities for the fleet-footed Brazilian.

Check out the infographic below for facts you didn't know about Neymar.