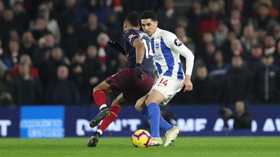 Super Eagles stars Alex Iwobi and Leon Balogun faced each other Wednesday evening at the Amex Stadium where Brighton and Hove held visiting Arsenal to a 1-1 draw and ended their three game losing streak.

The English press as usual gave their assessments of the players' performances.

"MF Alex Iwobi 5 -- Replaced Ozil at halftime, though didn't do much to justify that decision from Emery."

For mirror.co.uk it was a 5 out of 10 for Iwobi's international teammate Leon Balogun.

"Most at fault for Arsenal's opener. Failed twice to clear his lines."

In fact Shane Duffy's rating was an indictment on the performance of Balogun who partnered him in central defence.

"Duffy 6. Back from ban but defence not as secure without usual partner (Lewis) Dunk."

Dunk was suspended for the game albeit on the case of mistaken identity.

Mirror considered a 6 out of 10 the best scorecard for Iwobi:

Brightonandhoveindependent.com, that focuses on Brighton FC matches and its players stated:

"One of a few Albion players to be floored by Lacazette's neat footwork for the opener. Proved a hard man to beat for the rest of the game."

90min.com simply wrote: "Iwobi (6)."
The4thofficial.net did not consider the impact of the Nigerian as being match changing.

"His impact on the pitch was minimal after he came on to replace Ozil at half-time," the website stated.