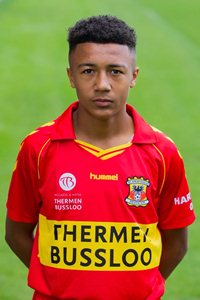 Allnigeriasoccer.com understands that three Premier League clubs are set to battle it out with Arsenal to sign Nigeria U15 international Lateef Omidiji Jnr.
Manchester United, Manchester City and Crystal Palace are now in the running to sign the Go Ahead Eagles center forward.
City have long been on the trail of Omidiji and had sent him an invitation to train and check out the club's facilities but Feyenoord, his past club, pulled the plug on any potential deal.
The Eagles are seriously interested in signing the highly-rated striker and have invited him to train in January after the break while United have reached out as well.
Things have changed as he'll be free to go anywhere at no cost as from next season.
Feyenoord had wanted to commit Omidiji to a professional deal but he refused to sign it as he was not comfortable with the terms, so he had to leave the club.
A proposed transfer to Ajax Amsterdam and PSV broke down because the KNVB blocked the move after Feyenoord accused their Eredivisie rivals of attempting to tap up the player.
Ifeanyi Emmanuel