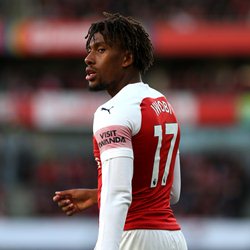 Manager Unai Emery has shed more light on his decision to introduce Alex Iwobi off the bench in some matches played by Arsenal in the Premier League this season.
The Nigeria international emerged as the game-changer when he replaced Aaron Ramsey in Arsenal's 2-0 win over Watford in September and the Gunners were more threatening in attack when he came on in the second half against Huddersfield and Burnley.
Emery's decision to replace Mesut Ozil with Iwobi in yesterday's 1-1 draw at Brighton was questioned in some quarters as his side laboured in the second half.
''A lot of the matches when we play in the second half, for example Iwobi, it helps us with a different situation tactically and helps us to win the matches,'' Emery told arsenal.com.
''In other matches, when we changed for the second half we took the performance to go to win.
''Yesterday, my intention was the same, it is tactically to change one player for another and with our analysis before that in other matches, in the second-half sessions is the reason I do that.
''But for me, it is only tactically and not [down to the] player, and for me every player is the same.''
Arsenal have not lost any of the six matches Iwobi was introduced as a substitute, picking up wins against Everton, Watford, Huddersfield Town and Burnley and sharing the spoils with Liverpool and Brighton.
Ifeanyi Emmanuel
Photo Credit : arsenal.com